Our operator D COM DRONE, located in the Seine-et-Marne department, responds to any request for aerial shots by drone over the eastern half of the Ile de France region.

Our platform HOsiHO Drone Network, recently received the request of an English audiovisual production company located in London for the realization of aerial shots by drone. They were looking for a drone operator able to produce video rushes, a photo report and also a 360-degree panoramic aerial photo of the brand new CONFORAMA logistics platform located in the Paris region, in the municipality of Tournan-en-Brie, in Seine- et-Marne (77). The works were finished and the platform already operational. As this foreign client was not able to move to France, he was looking above all for a perfectly autonomous video production professional but also for a photographer experienced in aerial photography, also mastering the technique allowing to produce a panoramic photography at 360 degrees.

«As soon as the order was confirmed, we made a first location on Google Maps in order to visualize the environment, but the maps offered dated from the very beginning of the work and only allowed us to locate the few 33 hectares of land still fallow but no foundation, no construction came out of the ground.

We still had the essential information to file our flight information file with the prefecture of Seine-et-Marne, and verify that we were well outside the CTR of Melun, prohibited from drone flight from ground.»

The measurements of this logistics platform are extraordinary.

800 m long and 250 m wide. It is the equivalent of about 30 football fields. With an area of â€‹â€‹180,000 m² and a clear height of 12m offering an estimated storage capacity of 270,000 pallets, Conforama has the largest logistics warehouse in Europe there.

«When we arrived, we had the choice of 3 car parks: in the center, in the south, in the north. Where were we going to establish our base camp? Where to position our vehicle in order to have easy access to our battery stock? After studying the plan and considering all the possible options, we came out of the reception office with a magnetic card allowing us to change the parking lot over the course of the half-day of service as there was so much to travel to connect the different points takeoffs that we had imagined.» 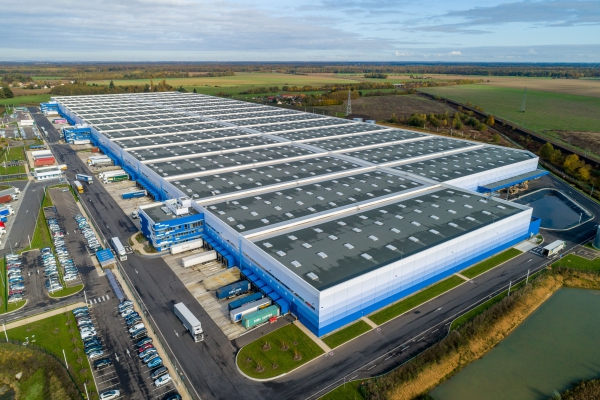 Where to position yourself to keep a maximum distance of 100m between the remote pilot and the drone?

«All the overflights were planned within the 33 hectares, but the ground was well within the limits of the agglomeration with the obligation of a declaration in prefecture for flights answering the operational scenario known as S3. Under these conditions, the drone can still travel some 200m provided that the remote pilot is stationed mid-course. It was our main concern.»

Creation of an aerial panoramic photo by 360-degree drone.

As with any photo, the first question that arises for the photographer is: where to place the camera and for what framing?

«We naturally chose to place the point of view at the center of the logistics platform with a slight step back so as to offer a comfortable framing to view all of the installations. Our experience with panoramic photos has led us to position the drone at a height of 60 m.»