Your UAV Drone Operator in Perpignan

Perpignan is the southernmost city in France, located a stone's throw from the border with Spain, very practical among other things for going out to eat some authentic Spanish tapas in Figueres, the city of the famous painter Salvador Dali, or in Portbou, a small village on the Costa Brava.

Barcelona, is the Spanish capital of Catalonia, is only a two-hour drive from Perpignan.

Also called Perpignan la Catalane, the French capital of Catalonia stretches between the Mediterranean Sea and the Pyrenees mountains, bordered to the north by the Corbières hills, and overlooked to the west by Mount Canigou. Perpignan is a commune in the Pyrénées-Orientales department in the Occitanie region.

City of Art and History, Perpignan counts among its monuments the Castillet, the Palace of the Kings of Majorca, the Saint-Jean-Baptiste Cathedral, the Theater of the Archipelago, ...

At the heart of a leading wine region, the city of Perpignan and the surrounding municipalities produce around ten different appellations, such as Côtes Catalane or Muscat de Rivesaltes.

The Perpignan Méditerranée Métropole metropolitan area has around 300,000 inhabitants and spans the entire Plaine du Roussillon region, between Agly and Têt, from Canet-en-Roussillon to Estagel. 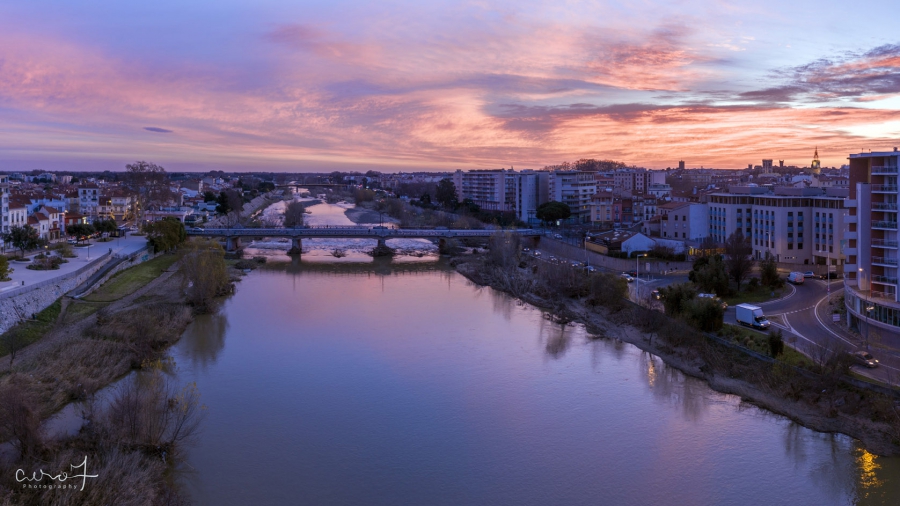 Panoramic aerial photo of Perpignan at daybreak, the Joffre bridge, the "La Têt" river descending towards the sea © Aero7

Aerial photographers and videographers in Perpignan

It is also about seizing opportunities when the weather permits, because if the sun is shining it is in particular thanks to the tramontane which chases the clouds, and drone and tramontane do not mix.

It also means accepting the regulatory and safety constraints linked to the proximity of Perpignan-Rivesaltes airport, which limit the altitude and the possible flight heights, often well below the 150 meters authorized in the best of cases.

Certain places in the city are better suited to the scope of the drone and the safety of third parties, namely the rivers that pass through the city, such as the Têt or the Basse, as well as the parks and gardens.

From the Côte Vermeille to the beaches of Barcarès, the drone pilot has something to satisfy his creative impulses for his audiovisual productions and productions, thanks to this original and beautiful coastline.

Photo and video by drone, such as the Aero7 practice, is a technique and an art at the service of companies in the Pyrénées-Orientales and Perpignan, and particularly in the tourism sector in order to highlight the region and its assets. 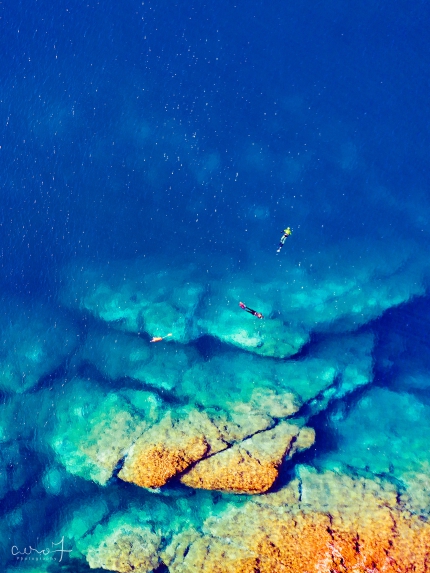 Established on the Catalan territory for several years, AERO7 knows the region perfectly, its vineyards and mountains, its seaside and its hinterland. In addition to being well established in the Pyrénées-Orientales department, AERO7 has also acquired its experience in other beautiful French regions. (see this report of a drone shooting on Loire river)

Thanks to our aerial image bank, AERO7 offers its aerial creations for sale, through a quality portfolio.

Aerial photographs and videos by drone also offer an excellent visual diagnostic tool for works or buildings whose access is not always easy. AERO7 can save you from a perilous adventure on the roof tiles, or reconstruct for you an external environment in 3D by photogrammetry, that is to say from photos taken by drone.

And if you want to be put in touch with these professionals, just click on the button below, or call them by phone on +33-633401218, to discuss your project of shots by drone, in Perpignan and the surrounding area!

Request a quote to Aero7 in Perpignan

Perpignan at daybreak, arrival in the city center

by the Joffre bridge and the Archipelago footbridge.

Salvador Dali described Perpignan station as "The center of the world". This would have been a place of inspiration for the artist, because he often traveled between Figueras and Perpignan. "It is always at Perpignan station that the most brilliant ideas of my life come to me". A huge statue of Dali made by the Pritchard’s stands in Plaza Catalunya, opposite avenue de la Gare.

AERO7, designs and realizes, in Perpignan, aerial images by drone

Producing aerial images by drone and of quality requires, as in many fields, a design phase and a realization phase. The design goes beyond simple preparation (location identification, authorizations, etc.), it is really a matter of making a mental representation of the images to be produced, in order to achieve efficiency, i.e. better quality compared to the time spent in flight with the drone. Especially since everything can go very quickly on the spot, such as a changing light or an environment on the ground no longer allowing flight safety.

The next municipal elections in Perpignan represent an excellent opportunity to highlight the city with new images.

AERO7 therefore followed a candidate in his electoral campaign to provide him with aerial images by drone allowing him to express his vision of the city and thus better present his program.

AERO7 will continue in 2020 to design and produce drone images of the city of Perpignan, in particular in the context of the production of a long documentary on the city, the broadcasting of which on a large French television channel is scheduled for the end of year.

Aerial photo of Cap Béar with its lighthouse, on the left the cove of Paulilles. Municipality of Port-Vendres © Aero7