Your Drone Operator in Morbihan

Mor-Bihan, which means "Little Sea" is the Breton name for the famous Gulf of Morbihan. Morbihan (56) is the only French department whose name comes from a regional language. Surrounded by 3 departments, Finistère (29), Côtes-d'Armor (22) and Ille-et-Vilaine (35), it is located in the south of the Brittany region.
With its 4 islands (Groix, Belle-Île-en-Mer, Houat and Hoëdic) and the 42 islands scattered in the Gulf of Morbihan, the department has more than 900 kilometers of coastline.
Fine sandy beaches sheltered by the Quiberon peninsula, wild beaches open to ocean waves at Plouharnel and Erdeven, wild dunes as far as the eye can see between Gâvres and Quiberon, cliffs jagged by the repeated assaults of the ocean of the Wild Coast, river valley daily invaded by the rising tide of the Ria d'Étel, the Morbihan coastline offers a diversity of extraordinary landscapes.
And when you get away from the sea, other magnificent sites remain to be discovered.
Carnac and its famous megaliths which stretch over more than four kilometers, Auray and its Port of St Goustan rocked by the tides, St Anne d'Auray city sanctuary dominated by its neo-gothic basilica, the Landes of Lanvaux and its fauna and its wild flora, Rochefort-en-Terre nestled on the side of a rocky ridge, the Nantes to Brest Canal and its locks along the water, the mysterious Brocéliande forest and its legends ...
With this multitude of exceptional sites, we understand better why TOURISM plays a key role in the economy of the department. It is for this reason that the Morbihan population, around 750 000 inhabitants distributed in 253 municipalities, is mainly concentrated in the coastal areas, near the 2 largest cities of Morbihan, Lorient and Vannes.

At the request of the Center des Monuments Nationaux, FlyUp Drone's Uavs flew over and filmed sites classified as the Carnac Alignments,

known worldwide and which are in the process of being listed as World Heritage by UNESCO, or less known as La Table des Marchands and the broken Grand Menhir of Locmariaquer.

After tourism, REAL ESTATE and BOATING are the predominant activity sectors in the economy of Morbihan.
With the beauty of its coastline and the mild climate, real estate is doing well. In the coastal zone, the rates per m2 in certain municipalities are close to the rates charged in Paris and Ile de France. And when it comes to the sale of an island in the Gulf of Morbihan, prices soar ...
With its 4 navigation basins that are the Bay of Quiberon, the Gulf of Morbihan, the Bay of Lorient and the Bay of la Vilaine, the Morbihan coastline has a multitude of marinas and dream spots for all water sports. Services and activities around boating therefore also, like tourism, have a strong economic impact in the department.
Another specificity is the nautical event with its offshore races. The growing media coverage of ocean racing is consolidating the sponsorship budgets of competitive sailing teams. With its 4 navigation basins, many boats are naturally based in southern Brittany with Lorient La Base and its international offshore racing pole and with the port of La Trinité-sur-Mer which welcomes the giants of the seas and maxi- trimarans.

Aerial photographers and videographers in Morbihan

In recent years, the digital revolution and social networks have revolutionized the way of communication. Image needs are growing and aerial imagery by drone, as photo or video, has its place in this revolution.
Since 2016, FlyUp Drone drones have been flying over its cities, towns, villages, monuments, historic sites, the countryside, the sea, beaches throughout Morbihan.
The importance of the image in tourism has led FlyUp Drone to collaborate with many tourist offices.
Our service provider was lucky to be chosen to film with his drones all the islands of Morbihan for the association "Baie de Quiberon et ses Îles", the grouping of all the Tourist Offices of the Bay of Quiberon (Quiberon, St Pierre de Quiberon, Plouharnel, Erdeven, Carnac and La Trinité-sur-Mer)
He also works regularly with prestigious real estate agencies to highlight castles, mansions and exceptional properties.
At the request of the Center des Monuments Nationaux, the FlyUp Drone drones flew over and filmed sites classified as the Carnac Alignments, known worldwide and which are in the process of being listed as World Heritage by UNESCO, or less known as La Table des Marchands and the broken Grand Menhir of Locmariaquer. 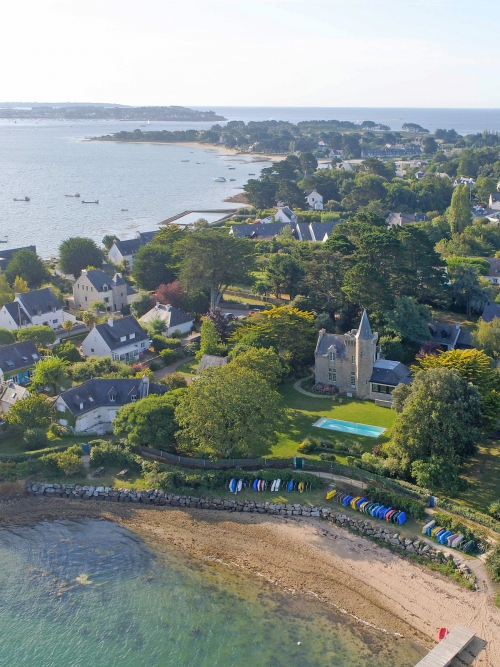 Aerial photo by drone of a mansion with a view of the Gulf of Morbihan and in the immediate vicinity of the Bay of Quiberon, for a Prestige real estate agency © FlyUp Drone

Image experience and a professional team to represent the HOsiHO Drone Network in Morbihan !

FlyUp Drone and its team of professionals (experienced pilot, photographer, videographer, editor), correspondent for all of Brittany and Loire-Atlantique department (44) of the HosiHo Drone Network, is based in Vannes.
The town of Vannes, open onto the famous Gulf of Morbihan is the ideal place to shine throughout Morbihan and its towns like Lorient, Lanester, Ploemeur, Hennebont, Pontivy, Auray, Guidel, Saint-Avé, Ploërmel, Séné, Quéven, Larmor-Plage, Sarzeau, Arzon, Quiberon, Carnac, Grand-Champ, La Presqu'île de Quiberon, La Presqu'île de Rhuys and the sublime Belle-Île-en-Mer.

With its past experience in Paris in the world of audiovisual advertising production, FlyUp Drone can manage for you all aspects of the production and realization of your projects, whether photo reports or video shoots.
Our Breton service provider, specialized in audiovisual, can advise you whatever your needs. From tracking to the logistical organization, from the management of filming authorizations to drone overflight declarations, from photo or video capture to the post-production : FlyUp Drone supports you.
So take advantage of the HOsiHO Drone Network, which has the best aerial image specialists in France among its members, and what better way to convince yourself than to browse their portfolio of aerial footage available through our Drone stock image bank?
For your project in Brittany, contact FlyUp Drone directly on +33 (0)6 07 39 24 26 or through our online form. They will be happy to answer all your requests.
For your information and to know the rates generally charged by the members of our network, we invite you to have a look at this dedicated page.

Request a quote from FlyUp Drone in Morbihan

Communicating is essential for sailing competition teams.
Our service provider works with several teams to provide them with aerial images.

FlyUp Drone is also particularly proud to have filmed for several months in La Trinité-sur-Mer and in the Bay of Quiberon, the trimaran Multi 50 "Réauté Chocolat" of the skipper Armel Tripon, winner of the 2018 Route du Rhum.

FlyUp Drone at your service for more technical drone missions in Morbihan !
The development of telecom networks in rural areas, with access to 4G and soon the arrival of 5G, is essential for all French territories. Telecom operators, to be able to capture as many customers as possible, must imperatively develop the coverage of their networks.
FlyUp Drone regularly carries out Telecom Missions for all French operators in the Breton countryside. These missions consist of taking 360 ° panoramic photos at different heights on the sites that could accommodate future antennas.
These 360 â€‹â€‹° panoramas, which are HD photos assembled, allow you to visualize any obstacles (trees, buildings, etc.) at given heights that would limit the range of the antennas.
Some companies specializing in property inspection and diagnosis are now using drones on their sites. No need for a gondola, saving time, security for the inspector who stays on the ground to view a control screen… In the end, drone inspection is simple : it's less cost, more security and more profitability. Our service provider FlyUp Drone is also a drone operator for property inspection and diagnosis in Morbihan. He intervenes for asbestos diagnosis and control, on buildings before works are implemented or before their demolition.

Panoramic aerial photo by drone in the Morbihan countryside, taken during the technical visit of a French infrastructure operator © FlyUp Drone