Find your drone pilot and cameraman in Strasbourg for your drone filming in East of France, Alsace, Lorraine

Here is the UAV operator representing our network of professional UAV pilots in Strasbourg,

Prefecture city of the Bas-Rhin department, with more than 277,000 inhabitants.

Skypic has been working for many years in this border region of Germany, flying its drones and shooting its cameras, filming and photographing the cities  of Alsace and the East of France.

Proof of this is its impressive portfolio of aerial images, photo, video and timelapses below, taken with their drones and cameras by the team's talented cameramen and pilots. 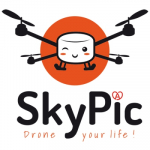 Drone footage and aerial photography for sale on the HOsiHO aerial stock images bank, The World from Above, with drone views of Strasbourg, especially known for its gothic cathedral Notre-Dame and its European Parliament.

Some aerial footage, photos, time-lapses taken by drone over Strasbourg,

Strasbourg, the capital of Europe

Prefecture of Bas-Rhin, Strasbourg is also one of the three capitals of the European Union. The ninth largest French conurbation, the Strasbourg Eurometropolis has more than 800,000 inhabitants on its territory west of the Rhine and more than 1.2 million including the German part. The capital of the Grand Est region, Strasbourg is one of the main economic centers of the North-East, ahead of cities such as Colmar, Nancy and Metz.

Seat of many European and international institutions

The Alsatian capital is the seat of various European and international institutions such as the European Parliament, the Council of Europe, the European Pharmacopoeia Commission, the European Court of Human Rights and the European Ombudsman.
This specificity makes Strasbourg a popular destination for international congresses, the city is the second French destination for this type of event. It also fuels the activity of a dynamic tertiary sector dominated by financial, legal and legal services, business consulting and a major research cluster. Despite the predominance of the service sector, the Strasbourg conurbation is also home to a varied and developed industrial sector.
An urban center listed as a UNESCO World Heritage Site
A visit to Strasbourg is incomplete without walking through the narrow streets of the historic district of Grande-Île, the banks of the Ill and the Faux-rempart canal. This urban center, listed as a UNESCO World Heritage Site since 1988, is home to an exceptional urban diversity in which French and Germanic influences have intermingled since the end of the Middle Ages.
Don't miss a visit to Petite France, the emblematic district of Grande-Île. This small area of the Strasbourg agglomeration offers a picturesque view of Alsace with its half-timbered houses, narrow streets and covered bridges. Its geographical location on the banks of the Ill river contributes to its romanticism and tourist appeal.

The must-see monuments of Strasbourg

Beyond its historic center, Strasbourg also has many monuments not to be missed such as the Notre-Dame de Strasbourg Cathedral, the Palais Rohan, the Covered Bridges, the Vauban Dam, the Kammerzell House or the European Parliament.
To visit these places of art and history, go for a walk, rent a bike for a ride or opt for a quiet visit by boat.

To visit Strasbourg is also to discover Alsatian gastronomy and its fantastic conviviality. Don't miss dining in a Winstub, the traditional Alsatian bar-restaurant, where you will taste traditional regional dishes such as the unmissable Sauerkraut, baeckeoffe, pike-perch fillet or braised ham. To taste a good tarte flambée, the famous flammekuech, it is advisable to leave the city and go to the town of Kochersberg which enjoys an enviable reputation in the region. Accompany it, in moderation, with a good Alsatian wine or a local beer.

« I have been a member of the drone network for 1 year and I am happy to renew for the next one.

Today, the HOsiHO network is clearly for me a group of skilled people with whom I exchange with quite frequently. More than just a platform of business input, it is a REAL network with people you can count on. The advantage of this network is also its uniformity from an equipment point of view but also from a quality point of view and thoroughness in the work. »

Ludovic Lutz, for Skypic in Strasbourg

Request a quote from Skypic in Strasbourg

In addition to its aerial audio-visual expertise over Strasbourg and Eastern France, both in drone photography and drone video,

Skypic is highly specialized in the following services, thanks to the experience and skills it has acquired over the years: