When at the beginning of December, Whitepine Video Co., an Irish audiovisual company contacted us via the HOsiHO Drone Network, his request seems simple and easy to implement at a logistical level and drone rules : filming by drone, off the coast, an oil tanker leaving the port of Fos-sur-mer, around mid-December.

A priori, at Drone-Pictures, we are rather used to being at sea with our drones, therefore filming on and around boats, whether for audiovisual purposes or more technical needs, such as the campaign of air quality measurements in which we were involved in 2019 between Marseille and the Gulf of Fos, precisely.


But, by digging a little deeper, the business gets much tougher given the constraints below:

- The super-tanker, like any ship, can leave the port by day or by night, whatever the weather conditions (strong wind, high waves, rain ...)
- Film only when it reaches a cruising speed of 20 knots (37.04 km / h)
- Respect a very precise flight plan with 3 passages of the drone from the bow to the stern and vice versa, this at altitudes of 10, 50 and 150 meters, knowing that the Maersk Pelican (that's its name), measures 245m long (see diagram) 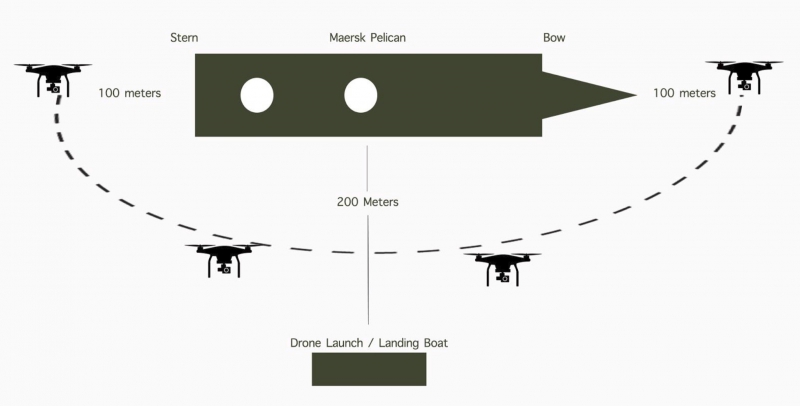 We love challenges, of course, and we have overcome them many times, but in this case, to say "Yes we guarantee you to do it", would be at best unconscious, at worst a shameless lie, and that, we do not practice it.
So, all things considered, measuring the constraints and above all the risks, we decide to direct the client towards a "safe" solution for aerial photography, namely the helicopter equipped with a Cineflex. Only this type of aircraft will be able to guarantee the following of a cargo ship of this size, in the open sea, launched at 20 knots in the front of potentially well-formed waves, at night, and / or by high wind or heavy rain! A drone will not be able to do much in the face of these circumstances, if it occurs on D-Day.
The production liked the idea of â€‹â€‹the helicopter, so we quoted it, but the amount was almost 4 times more than a Drone formula with Double operators aboard a tracking boat, stable, comfortable and ultra-fast. ..

The end-user customer, the Finnish company Norsepower  inventor and manufacturer of innovative rotor sails decides for the drone, knowing full well that we can only go out to sea and follow the tanker with good weather conditions, and only during the day. The good news will be the reduction of the max. speed of the tanker, which went from 20 down to 12 knots only (22 kmh, which is much more reasonable on water than 37 km/h)!
This is how it goes: the client has taken the risk of not being able to obtain these images (if the D-Day weather turns out to be rude), at a cost of substantially less expense.
The order and the logic of things are respected.
We, from Marseilles, are then mandated by the Finnish (manufacturer) and the Irish (production company) to follow a ship flying the Singaporean flag, belonging to a Danish shipowner (Maersk), and commanded by an Indo-Pakistani captain!

First task, choose the right boat that will follow this giant of the seas: comfortable, fast and having a landing platform for our drone Inspire 2, as well as a cabin where we could leave the drone and protect it from the spray during the phases of pure navigation.
With Yatch B&B Event  we quickly find "shoes on our feet", at Corbières port near Marseille, with the semi-rigid boat Padelya, of almost 13 meters with 2 V8 engines of 350 horses and a magnificent rear deck, ideal for taking off and landing our dual operator drone.
Everything is there, even a cabin with a bed (perfect to protect our gears from waves and saltwater).
We are jubilant, but it will be short-lived, because the operation will take much longer to materialize.
In addition to weather conditions, typically French socio-economic troubles like strikes will be added.
Judge by yourself : planned for an arrival at Fos Terminals mid-December 2019, the oil tanker Maersk Pelican will not arrive until December 20st, and will not be able to berth at port, this following the outbreak of a first strike movement, on 17/12/2019.
We must admit that it is really unlucky, especially since the boat will remain anchored in the Gulf of Fos, like fifty other ships, for 45 days. It's enormous!
Time is running out, Christmas holidays are passing, the New Year is coming quickly, and despite the countless false joys and promises of departure - postponed, delayed, canceled - this boat, like so many others, will have to wait wisely and at a standstill complete, let things go back to normal so that we can continue on our way, and we can take our aerial shots!

February 8, 2020, D-Day is finally here. Light wind, and few clouds in a very bright sky, promising beautiful lights, and icing on our cake, a daytime departure, first announced at 10am, then 11am, noon, but which will ultimately be at 2:30 pm. Never mind, here we are !
During this time, we make a phone call to the military base of Istres, BA125, because our flights will take place in an aeronautical zone controlled precisely by this army base (ie the CTR of Istres). Once agreement has been obtained from the control tower, we take care of testing our 4 on board cameras and filming by drone a pursuit of the semi-rigid launched at full speed in front of the creeks of the blue coasts, nearby Niolon. So many images that will go to the Making-Of video.
At 2.30 p.m., the Maersk Pelican finally established contact by VHF radio on Channel 6. It leaves the port and has just let go the pilot who lead him out of the port.
So here it is, ready to be filmed!
First flight dedicated to aerial photography by drone, since we don't need it to be launched at high speed to make still images from all angles. We have equipped the DJI X5s camera with a premium Zuiko lens from Olympus, with a standard focal length of 50mm.
Advantages of this high-end lens: it is very sharp and allows us to make striking images, while keeping the drone in flight at a safety distance of 200m (constraints imposed by the Port of Fos, the Captain of the boat and the owner). So, no vertical overview, no topshot views.
At the end of the first flight, our UAV remote pilot, accustomed to boat landings in the hands of the cameraman, operates with great precision this very delicate step, which you can see in the video of the making-of .

Second flight to come: the video shots of the tanker launched at full speed.
To do this, we have to wait for the captain to notify us.
In the meantime, we are following it, after changing the SD card and putting our equipment in the cabin, well sheltered from the waves which have well formed thanks to a wind that blows stronger than this morning, around 30kmh .
Time passes, but a problem arises: one of the two rotor sails, seems to slow down.
Worse, at the time of takeoff, one of them is completely stopped.
As a professional drone operator, we knew that what the audiovisual production company wanted above all were drone images where we would see these 2 sails rotating at full speed. This is to illustrate the Corporate film commissioned by his client Norsepower. It would be pointless to film the boat with one of the sails stopped. We then decide not to take off, and to notify the captain of the concern. The latter promises that a solution will be found and contacts Norsepower in Finland, which then takes control and forces the sail to restart.
45 minutes later, the two Rotor Sails spin at 160 rpm and we have the GO of the Maersk Pelican.
Problem: the sea becomes difficult for our skiff, with waves of 2 meters. The takeoff is always done at a stop, there is not properly speaking of concern. It is in the "pursuit" phase that we will suffer.
Our small boat must follow the drone which itself follows the tanker. The drone pilot must always keep his remotely piloted aircraft in view in order to ensure his positioning relative to the filmed ship, and according to what the cameraman asks him to do.
With 2m waves coming from a swell from the front, the boat makes impressive leaps and it is complicated to hold the handle of the joysticks of the remote controllers, both for piloting and for ensuring a precise and fluid video framing.
In addition, we are regularly overwhelmed by the waves, and our video screens - iPad and CrystalSky - as well as the radios suffer from salt water which gradually invades them.
Another annoyance: the drone in flight, facing the wind, has a lot of trouble flying  up from the stern to the bow in less than 2 minutes. Those requested views will be impossible to make: 3 sequences of the drone at 10, 50 and 150 meters. Lacking power, given the wind and the length of the ship.
As a drone production company, we are used to adapting and making decisions, in mid-flight, to bring back what is doable and beautiful, in terms of images. But for now, we need to put down our flying camera, change the batteries and the SD card, dry the radios and catch our breath.

4 p.m .: Last drone flight. We are going to catch video footage as close as possible to the rotor sails which turn very quickly. Then gradually move away from the tanker, go around it in a semi-circular flight, then let it spin offshore with a nice backlight on the horizon.
Aboard the Padelya masterfully maneuvered by Georges, we suffer and find it difficult to stand up, as our boat is shaken by the waves, overwhelmed by water. We are soaked, but we see on our screens the direct video return, the magnificent images that are recorded.
Jérôme and Sami exult. The drone only has 30% battery left. We have enough visual material. The alert is beeping, and it's time to put the bird down and come back to dry and rest!
Pelican mission accomplished. Images and sensations in mind.

Client's final cut - Bringing sailing back to shipping, by Norsepower

By radio, we thank the Maersk Pelican captain and push the boat at full power heading back to Estaque harbor, leaving behind us one of the first tankers, equipped with wind technology which ultimately saves it 8% of diesel, therefore less polluting the atmosphere, and without rejecting contaminated water.
Another aerial service by drone of which we are particularly proud because it contributes, admittedly modestly, to publicize the ecological solutions making it possible to reduce pollution, the emission of greenhouse gases, therefore to fight against the climate change of our planet. Earth.
So thank you to our customers for their trust.