The Ile-de-France, also known as the Paris region, includes 8 departments and concentrates around 20% of the population of France. The smallest department in area is Paris (75). Indeed, the capital alone is a department. Around Paris, a first ring is made up of Hauts-de-Seine (92) to the west, Seine-Saint-Denis (93) to the northeast and Val-de-Marne (94) to the south- East.
Then come the Val d'Oise (95) to the north-west, the Yvelines (78) further to the west, Essonne (91) further to the south and finally Seine-et-Marne (77) to the east .
The latter is the largest department in the Paris region since it occupies almost half of the total area.
Our member and service provider D COM DRONE is based in Seine-et-Marne, in the heart of the Marne-la-Vallée region, around thirty kilometers east of Paris.
From there it naturally radiates over the departments of the eastern half of Île-de-France where we find the cities of Saint-Denis, Saint-Ouen, Bobigny, Noisy-le-Sec, Bondy, Rosny-sous- Bois, Aulnay-sous-Bois, Tremblay-en-France, Noisy-le-Grand, Vincennes, Ivry-sur-Seine, Orly, Créteil, Champigny-sur-Marne, Villiers-sur-Marne, Melun, Fontainebleau, Nemours, Provins, Coulommiers, Meaux.
He also at your service to undertake all services by drone, artistic or technical, in the districts of Paris - 3rd, 4th, 5th, 10th, 11th, 12th, 13th, 18th, 19th and 20th.
It's not entirely by chance that their latest 2019 showreel of drone-produced images showcases
video shootings carried out on the Grand Paris Express sites.
If DCOMDRONE promises you "the best points of view for the most beautiful prospects" it is because they know their job perfectly and have complete mastery of their environment. Since 2015, on many occasions, the drones of the drone operator have flown over the capital and several departments of Ile-de-France.

Photo report and video shooting by drone in the Paris region, by day or by night

For several years now, the region has recorded very strong activity in the construction and public works sector. This lead us to fly either by day, and sometimes by night.

This activity is notably supported by the Pharaonic worksites of the Grand Paris Express with more than 200 km of metro and some 60 new stations, by the construction of the infrastructures necessary to host the Olympic and Paralympic Games of 2024, more generally by emblematic worksites of the announced metamorphosis of the capital and its surroundings, or the numerous energy renovation projects.
All this undoubtedly drives the market for audiovisual or technical services by drone.
It is in this context of development of the drone sector that our service provider constantly revisits the scope of its offer, sizes its team made up mainly of experienced pilots, videographers and professional photographers.

We have the assurance that it supports technical developments with the necessary investments in order to offer you a fleet of drones adapted both to the realization of audiovisual services in all its forms, from photographic reporting to high-end video shooting, and in classic video formats and 360-degree immersive videos (this page tells you more) than more technical uses such as thermography, 3D building modeling, orthophoto production or precision farming as evidenced by this drone service for high-speed phenotyping. 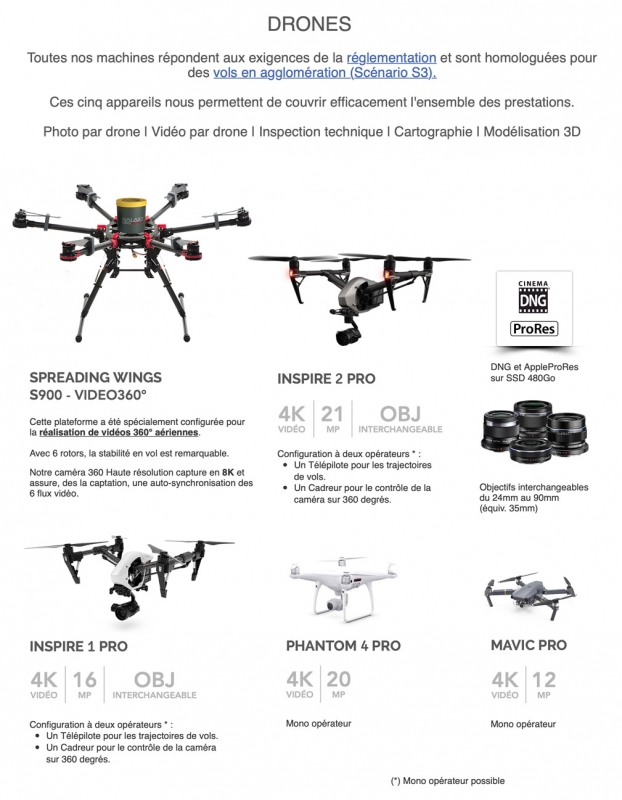 When you entrust DCOMDRONE with aerial photography by drone, whether it is a photo report or a video shoot, or any other technical service using a drone, you first order a service of service. As such you are looking for a recognized professional who will listen to you, advise you and produce a quality service, in accordance with your expectations, commitments and for a competitive price (see the typical example of a complete service)

Audiovisual production companies or journalists from local or national TV media will be reassured to know that DCOMDRONE is above all animated by audiovisual professionals with many years of experience in the production of reports, documentaries, institutional films and businesses.

You can also have a look at their drone stock footage portfolio available to license for your projects, through our aerial video bank.
The Paris region is the permanent playground of DCOMDRONE; they are therefore perfectly versed in the procedures, know the procedures and have the contacts to direct the files with the prefectures and the civil aviation services controlling the airspaces of the Ile-de-France region.
To help you approach a project or validate an intention, you can contact them directly at 06.84.76.74.44 or via our form.
Whether the needs for shooting by drone emanate from TV media, production companies, communication agencies or directly from construction companies or architectural firms (to name only the main sponsors), the HOsiHO Drone network Network offers an immediate response through an efficient, secure and commission-free connection with the local Drone Operator company.

Request a quote to DCOMDRONE in Paris area

Video by drone on construction sites in urbanized area of the Paris region.

Footage carried out by a UAV pilot/Camera operator or by a team of a Drone Telepilot and a Cameraman, depending on the environment and / or the complexity of the plans to be produced.

To represent the HOsiHO Drone Network in the Paris area, it also seemed important to us to select an operator with solid experience in the implementation of services by drone carried out in urban areas and more particularly in these populated areas that Paris and surroundings. If the regulations applicable to the use of civil drones within the framework of a professional activity are the same everywhere in the hexagon, it is more complex to ensure its strict respect here in Ile-de-France from the high density of buildings and infrastructure. In addition, the administrative procedures to be undertaken can also prove to be more complicated and tedious. A bad approach to the project, an incomplete file or one that does not have enough guarantees in terms of security will very often be rejected, thus putting the sponsor in difficulty.

We are pleased to assure you that our service provider DCOMDRONE has never recorded a refusal on the part of the competent authorities, whether it is the prefectures or the air navigation services which are almost systematically requested to authorize flights in drone in Paris and the Ile-de-France departments.