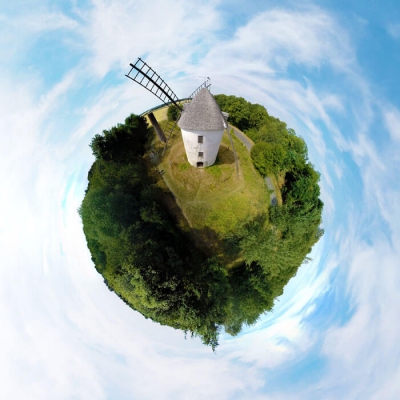 Why not ask for the creation of an interactive virtual tour in 360 ° from your photos and videos, air or ground?
Imagine the interactivity with visitors to your website or on the visited location !
With a virtual tour, you allow your customers and prospects to discover a place and walk there, as if they were there. Everything starts from a 360 ° photo of the main place. While wandering there, the visitor is invited, either to click to pass to the following site, to visualize a text, an animation, a slide show, a video, or to listen to a sound.

Ideal for an exhibition, a tourist site, a hotel, a large company, an event ...

The access to this virtual visit is very simple today thanks to HTML 5: website, tablet / smartphone, computer. On a computer, an internet connection is not required because the entire pack of the virtual tour is stored on the hard disk.

The creation of 360° virtual tours

In recent years, immersive video techniques have been developing. One of them consists in realizing 360° virtual tours.

Originally, the first companies to request 360-degree virtual tour videos were in the real estate industry. Agencies and developers alike found that this format was a powerful business argument in a real estate transaction. Gradually, other sectors of activity became interested in this type of video like the industry for corporate films, cultural places or hotel companies.

The following HOsiHO Drone Network companies will be able to support the entire creation of these virtual tours. From the production of content (360 ° photos by drone or on the ground, videos, sounds ...) to their integration with your existing archives and elements in a coherent and interactive whole!