Your Drone Operator in Dordogne

Bordered by the departments of Haute-Vienne, Corrèze, Lot, Lot-et-Garonne, Gironde, Charente-Maritime and Charente, the Dordogne with its some 418,000 Hectares of wooded area, immediately ranks as the 3rd most wooded department in France.

It is a jewel of the New Aquitaine region, which due to its rich history makes it probably one of the most beautiful playgrounds for an image hunter and especially for an aerial videographer.

Sarlat la Caneda, Riberac, Périgueux, Bergerac, Saint Astier are all names that evoke in each of the desires of discovery and return to the sources.

Besides, the French are not mistaken and after going through a lower demographic in the 80s, the Dordogne has more and more Périgord people, attached to their tradition and their heritage, whether architectural or culinary. . There is certainly the famous foie gras but also the wine of which certain appellations like Monbazillac or Petcharmant resonate internationally. 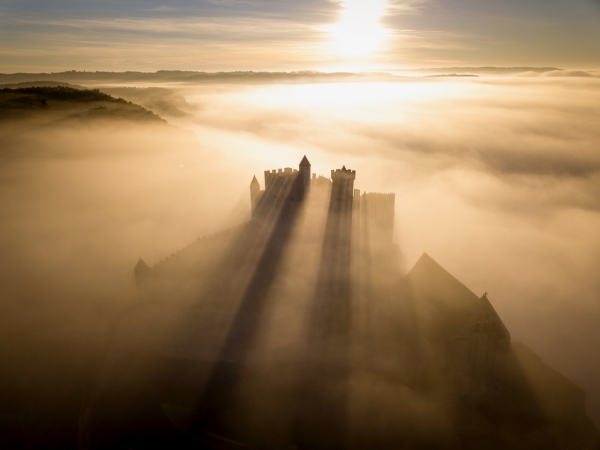 This day there was great sun over the Château de Beynac. Bad luck a thick, low fog enveloped the castle.

No matter what its a priori annoying conditions, offered us one of the most beautiful shots that we had the chance to capture.

Aerial photographers and videographers in the Dordogne

SpiritProd33 is the local representative of the HOsiHO Drone Network in Dordogne.

A drone operator approved by the DGAC under registration number ED00319, it is an atypical and dynamic team made up of a seasoned pilot Stéphane Labaurie, and a professional photographer Jean Bernard Nadeau.

It's a team obsessed with the quality of the images.

Able to fetch the most beautiful lights as many times as necessary to obtain the desired images or on the contrary sometimes take advantage of the unexpected gift of nature to capture a moment that will no longer be represented.

Whether for photographic or video services SpiritProd33 will bring you its technical expertise and its aesthetic requirement. 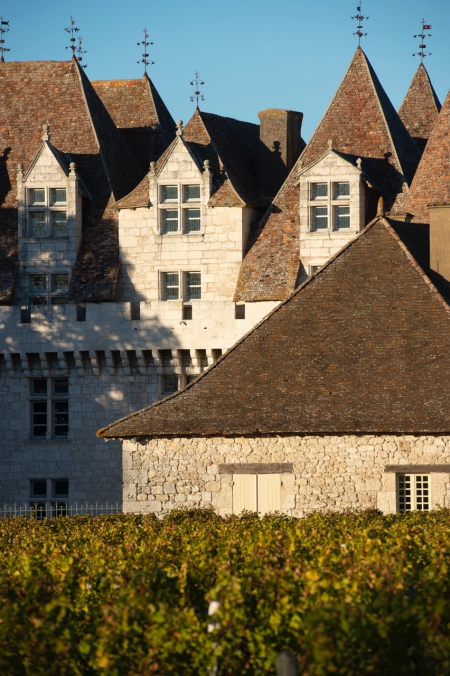 Monbazillac, a 16th century chateau that proudly measures Bergerac, an appellation known the world over, which reminds us, if need be, of the contribution of the Dordogne to French influence.

The choice of SpiritProd33 to represent the HOsiHO Drone Network in Dordogne!

The choice of SpiritProd33 to represent the HOsiHO network was a natural choice given its first-rate contribution to our aerial video bank.
You just have to browse the SpiritProd33 portfolio to convince yourself that this passionate team is above all in search of beautiful images.
So much so, that we dedicated the first Interview with our Authors to these team (ie. a series of portraits of those who make HOsiHO.com)
Whether by the choice of its subjects like the Château de Beynac, or the village of Le Roque-Gageac officially labeled one of the most beautiful villages in France, or by its requirement as for framing, composition, light and movements of camera. The team makes the most of the Drone tool and offers us plans for some that are simply unique.
Particularly attached to compliance with regulations, Stéphane who ensures the piloting and mounting of projects, manages all the administrative procedures necessary to act legally and safely while Jean Bernard applies all the aesthetic requirements of his photographer's eye.
And if you want to be put in touch with these professionals, just click on the button below, or call them by phone on 0663651538, to discuss your project of shots by drone, in Dordogne or in the South- West of France.

Request a quote to Spiritprod33 in Dordogne

The Dordogne, but not only, in this video which retraces some of the missions of SpiritProd33 for the year 2019 and which transports you from Bordeaux to Beynac via Saint Jean de Luz, the citadel of Blaye, the vineyards of Cognac and us let's move on, will give you an overview of the work of this team!

SpiritProd33, designs and produces comprehensive photo and video services in the Dordogne

SpiritProd33 is able thanks to the complementarity of its profiles to accompany you on your video or photo projects from their conception to their delivery by ensuring aerial and ground shots of professional quality.

SpiritProd33 mastering the techniques of motorized timelapse, panoramic assemblies under Lightroom, editing on Da VinciResolve, photo editing in Photoshop, motion design on Fusion and having a shooting studio, brings you a 360° service for your audiovisual project and always in a good mood and conviviality.

Stéphane and Jean-Bernard will listen to you to guide you in your communication project and will deliver a service that meets your expectations.

Do not hesitate any longer and contact them for all your projects in Dordogne.

The classified village of Domme, one of the jewels of the Dordogne overlooks a sea of clouds in the early morning. The aerial shot is ideal here to understand the specificity of this village.